First verse:
Yankee Doodle went to town
Riding on a pony,
Stuck a feather in his cap
And called it macaroni.

"Yankee Doodle" is often credited to Richard Shuckburgh that lived in the 18th century, but both the lyrics and melody has probably a much older origin. The song is associated with America and the military in the colonial period and the lyrics gives it a humorous touch.

"Yankee Doodle" for guitar with full accompaniment in two versions. The first version include simple harmonizing whereas the second has the melody in a lower octave and eight notes as accompaniments in the higher octave. Both can be downloaded free in pdf-files and listen to.

"Yankee Doodle" for flute in the key of C. Free download in pdf-file and audio. 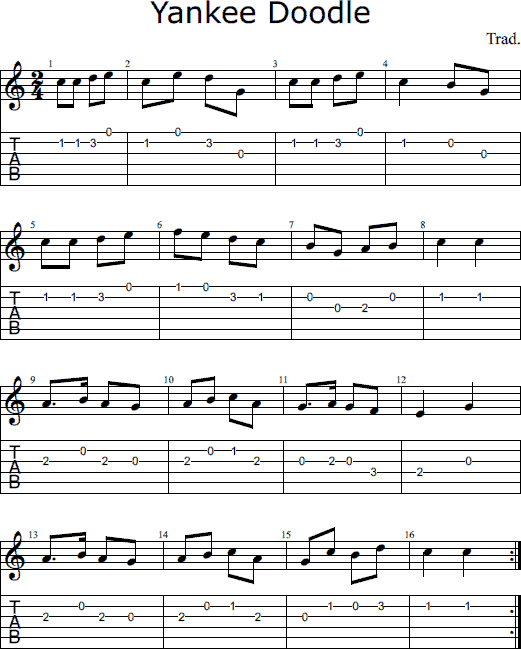 It will be easier to learn the song if you notice the AABB structure: the 1-4 and 5-8 bars are similar and so are the 9-12 and 13-16 bars. Notice also that this song only includes the first three frets together with open strings. Because of that, your hand position will be rather stationary.

The most challenging with this song is probably the tempo, which is rather high. The 100 beats per minute tempo in the presented versions makes it quite fast in the 2/4 time.

Words:
Doodle = according to Wikipedia: "The term Doodle first appeared in English in the early seventeenth century and is thought to be derived from the Low German dudel, meaning 'playing music badly'."

There are more verses, up to 16, in the full version of the song. 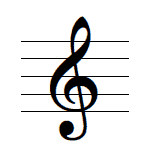 The presented version of Yankee Doodle is played in the key of C. 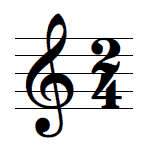 The song is played in 2/4 tempo (counted one, two, three for each measure).